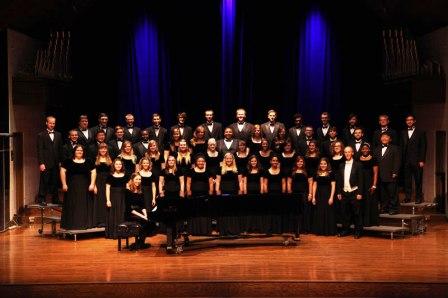 In the past two years the Greenville College Choir has been invited to perform with the Kingsbury Ensemble, one of the Midwest’s premier professional early music ensembles, as well as at the Illinois Music Educators Conference and the American Choral Directors Association’s Central Division Convention. The Choir regularly joins with the Greenville Choral Union for concerts of larger choral-orchestral works such as Bach’s Magnificat, Mozart’s Requiem, and the annual Christmas performance of Handel’s Messiah.

The Greenville Choir consists of 45 undergraduate students from various fields of liberal arts study, including the College’s five music degree programs. As the flagship choral ensemble of Greenville College, the choir presents as many as twenty off-campus performances each year as part of its annual tour. Students’ dedication to the program is consistently made evident by the professional quality of their performances.

The choir’s spring concert schedule includes performances in Illinois, Missouri, Michigan, and Indiana.  The choir will perform in Greenville on March 16, May 4, and May 24.