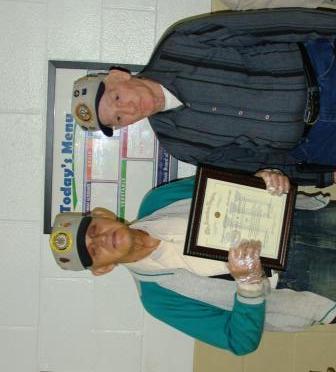 Richard Niepert was recognized during the Mulberry Grove American Legion Post 1180’s pancake and sausage breakfast for 60 years of continued service with the post. Post commander Charles Bone said the ceremony was a surprise for Neipert.

“He knew that he was coming up on his 60th year and he was supposed to be receiving one, but he didn’t know that I had already received it a couple weeks earlier,” Bone said. “He kept bringing it up and bringing it up and he said, ’Boy, I don’t know why it is I haven’t gotten my 60 year award,’ and I said, ‘I don’t know, Dick. We’ll just wait and see, buddy. I’ll get on the phone and I’ll call Bloomington and see what’s going on.’ Well, I already had it.”

Bone said Niepert has served as post commander in the past and is currently serving as adjutant.

“Dick’s the backbone of the American Legion Mulberry,” Bone told WGEL. “He knows all the ins and outs and what have you, what you have to do and what you can’t do.”

Niepert served in the United States Marines and received his award in front of family and friends.