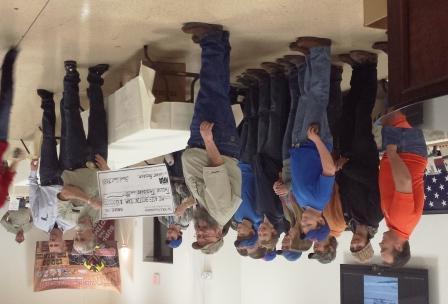 At their 18th annual banquet Saturday, March 8, the Shoal Creek Friends of NRA presented a large donation to Mulberry Grove Aces trap team. Don Niehaus with the chapter told us they had a packed house.

“We raised over $28,000 for the NRA Foundation,” Niehaus told WGEL. “Of course it wouldn’t have been possible without the support of our underwriters and donors who donated merchandise, and I think the highlight of the night was presenting the 2014 NRA Foundation grant check to the Mulberry Grove Aces trap team in the amount of $12,000.”

Half of all proceeds from the banquet stay in the region, benefiting organizations such as the Mulberry Grove High School Aces trap team, local 4-H clubs, Boys Scouts of America Greater Saint Louis and the Mount Vernon Police Department.