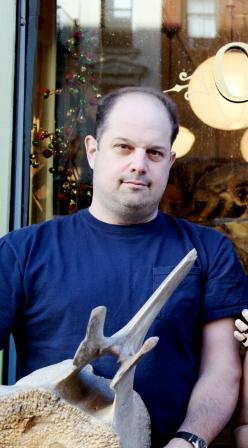 Since November 2010 viewers of the Science Channel have been amused – and occasionally perplexed – by “Oddities”, a program centered on Obscura Antiques and Oddities, a unique New York store that sells everything from shrunken heads to vintage surgical instruments. Mike Zohn, star of “Oddities” and co-owner of Obscura Antiques and Oddities, will be visiting the DeMoulin Museum in Greenville this Saturday. Zohn will be signing autographs and doing a program about his store and TV show.

Zohn attended a program last spring presented by John Goldsmith, DeMoulin Museum curator, at the Observatory in Brooklyn, New York. “Mike brought a couple of DeMoulin initiation devices from his collection and we had a great time taking turns demonstrating pieces for the audience,” Goldsmith explained. “Since then I’ve been on the lookout for DeMoulin artifacts for Mike. He’s a big fan and we’re excited to have him visiting us.”

DeMoulin Bros. & Co. got its start in 1892 as a manufacturer of fraternal regalia and initiation devices for organizations like the Modern Woodmen of America, Odd Fellows, and Improved Order of Redmen. The DeMoulin Museum has 17 of these rare initiation gags on display, including one just recently added. “The museum purchased an original DeMoulin Knife Throwing Stunt in late December from a woman in Davenport, Iowa. Mike has mentioned to me that it’s a piece he’s really looking forward to seeing,” Goldsmith said.

Due to the anticipated crowd for Mike Zohn’s program it will be held at the Globe Theater, 105 N. Third Street, at 10:30 a.m. Saturday. He will then greet fans at the DeMoulin Museum, 110 W. Main Street. Additional details will be released closer to the date.