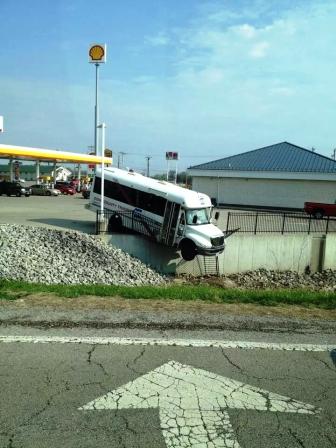 A Bond County Transit bus was in a precarious spot Monday afternoon.

According to Greenville Police, the driver of a Bond County Transit bus had stopped at CC Food Mart Monday around 4:26 p.m. to fill up on fuel.  After paying, the driver told police he returned to the vehicle to find it rolling away from the diesel fuel pump.  The driver attempted to open the door to apply the break, but was unsuccessful.

The bus hit a concrete barrier on the northeast corner of the Shell station lot and rolled over it, breaking through a black metal fence.  It came to rest with the front wheels hanging over a retaining wall.

No one was on board the bus at the time and no one was injured.