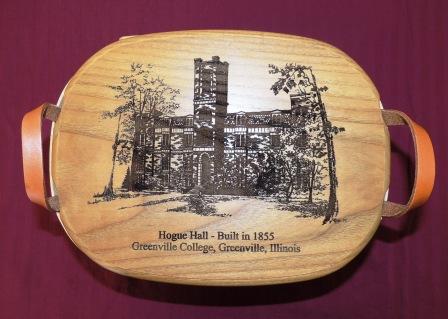 The Greenville Bicentennial is now selling the second in its series of Historic Greenville baskets.  The first, which featured the Bond County Courthouse, sold out less than a week after debuting last December.  The new basket has the late Robert Horsfall’s drawing of Hogue Hall on its lid.  The original artwork had been commissioned several years ago by Bradford National Bank.  Hogue Hall, also known as “Old Main”, served many purposes on the Greenville College campus from the late 1850s until its demolition in 2008.

John Coleman, Bicentennial fundraising committee chairman, said, “We are anticipating a lot of interest in the basket among current and former Greenville College faculty and students.”

Karen Kessinger, a member of the fundraising committee added, “Response to the first basket was overwhelming.  Everyone raved about the quality and we began receiving inquiries about doing another one.  We think the new Hogue Hall basket will also be a hit.”

American Traditions of Canal Fulton, Ohio manufactured the “friendship” baskets, which are hand-woven of hard maple.  They may be purchased for $60 each at Watson’s Drug Store, Bond County Realtors, and Bradford National Bank.  One hundred baskets will be available in the initial run.

Greenville Bicentennial commemorative t-shirts, sporting the event’s logo, are available at Watson’s Drug Store for $15 each.

Greenville will mark its 200th birthday in 2015 with a series of observations; the main celebration is slated for Labor Day weekend that year.  For more information, visit www.greenville200.com.