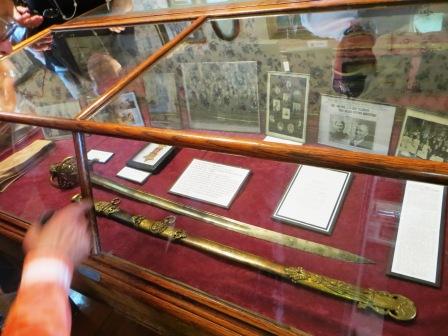 After he was wounded and captured by Confederates during the Civil War, Colonel John B. Reid’s sword was taken by the enemy. Miraculously, Reid survived a bullet through the lung to return to Greenville after the war, where grateful Bond County residents purchased Reid a new sword.

Last January the sword appeared on an episode of Antiques Roadshow on PBS. Now, the owner of that sword, a descendent of Colonel Reid, has lent it to the Hoiles-Davis Museum in Greenville, where it will be on display.

“We’re certainly thrilled about it. It hasn’t just been the sword, it’s been the entire event,” local historian Kevin Kaegy told WGEL. “When over 60 descendents and guests are here today for the talks and to witness this, it’s just a totally cool event for us at the [Bond County] Historical Society.

“I’ve even learned a few new stories. That’s the fun thing about all of this. When these artifacts come together, we’ve got several really neat new artifacts that add to an already very good story.

Kaegy said the Historical Society expects the sword to be on display at the Hoiles-Davis Museum for at least two or three years before its returned to the family.