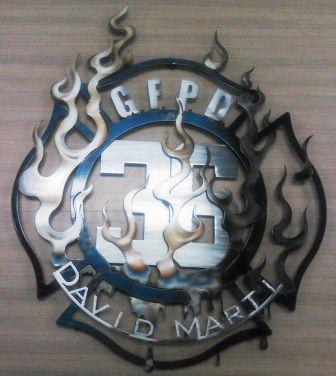 A special presentation was made in memory of Captain David Marti, who passed away last fall, at the last Greenville Firefighter Association meeting. Friends and family presented the association a handmade metal plaque in honor of Marti.

“It’s a very nice looking plaque,” Fire Chief Bill Johnston told WGEL. “It has Dave’s number on it. Each of the firefighters has their own number — that’s how we keep track of everybody. It’s got his name on it. It’s also going to have how many years he was on the Greenville Fire Department.

“Dave held several positions. He was a firefighter, mainly. He was a trustee, at one time, with the district. He was a captain when he passed away. He took on our junior program and made sure they had the correct guidance. He just did several things.”

Johnston told WGEL he can’t say enough about Captain Marti and all he did for the department and the community. The plaque and memorial should be on display at the fire department soon.