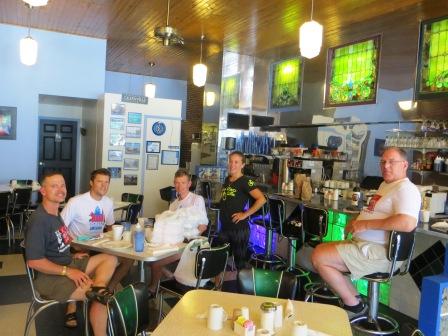 Two cyclists from team “For Pete’s Sake” stopped at Corner Café in Greenville for some carb loading before hitting the pavement again with The Race Across America. Russ Folger, of Golden, Colorado, and Craig Streit, of Phoenix, Arizona, are part of a four-person team currently ranked in fourth place. Folger told WGEL about his experience so far.

“It’s been spectacular, actually. I couldn’t think of a much better way to see the country and feel the country too. There are places where you think, ‘Oh, it’s the Midwest, its flat’. It’s NOT flat.”

The four cyclists take turns each riding sections of the 3,000 mile race route. Streit, who said he started training for the event only a few months ago, told us about the physical demands of the race.

“It’s been everything I expected it to be and more. It’s really challenging, but rewarding. You go through cycles of feeling fantastic, where you feel like you can pedal forever, and you go through sections where to just turn the pedals over is really difficult. It’s been nice to have a good team around you. You rarely all feel bad at the same time…it’s been awesome.”

Team “For Pete’s Sake” is riding to raise support for ALS on behalf of The Pete Zucker Foundation, an organization dedicated to raising money for research and awareness of ALS, also known as Lou Gherig’s disease. You can follow their progress at raceacrossamerica.org.