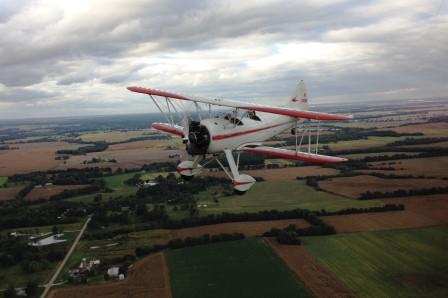 The Greenville Airport will hold an Open House and Airstravaganza Saturday, October 4. The event is open to the public and will display aircraft from the area as well as others who have flown in for the day. Food will be available on site.

Rides will be available for those interested using the airport’s Cessna 172 and the 150. Pilots will be on hand to answer questions and talk about aviation. An ARCH medical transport helicopter will be on the grounds for display and rides will be given in a Robinson R-44 4-seater helicopter.

As a special attraction a military T6-Texan will be on display. The T6 is a pre-WW II trainer plane powered by a 600 hp Pratt & Whitney radial engine. Also on display and available for rides is a 1941 WACO bi-wing aircraft. All ride reservations can be booked in advance by filling out the online form at greenvilleeaa.com/up-coming-events.html.

A special appearance will be made by the Texas Twisters, a T-34 formation and aerobatic team. These aircraft were built in the 1950s and were used by the Air Force to train military pilots. The pilots from this group consist of a retired physician, a dentist, a retired Delta pilot, a trucking company owner and two involved in the aviation parts/repair business. The group of six perform a series of formation flights as a salute to veterans.

In addition to aircraft, there will be a display of antique tractors and military vehicles. Various demonstrations relative to aviation will be performed. Attendance prizes will be given at the end of the event.