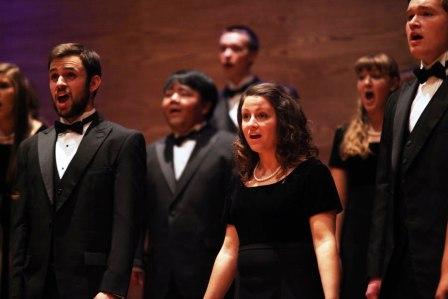 The Greenville Choral Union will begin vocal rehearsals for its Eighty-fourth Anniversary Season on Tuesday, September 23 at 7:00 p.m. Singers (high school age and older) are invited to join this fine ensemble. Rehearsals will be held in the James E. Wilson Recital Hall in the Whitlock Music Center on the Greenville College campus, (formerly known as the Greenville Free Methodist Church) located at the corner of College Avenue and Elm Street.

This year’s concert marks the eighty-fourth annual performance of George Frideric Handel’s oratorio Messiah in Greenville. The 110-voice Choral Union and 50-piece orchestra will perform selections from Messiah (Part 1 and the ‘Hallelujah Chorus’) as well as John Rutter’s Magnificat. This year’s presentation will include volunteer singers and instrumentalists from the surrounding area, as well as professional orchestral players and a vocal soloist from the greater St. Louis region. The concert will take place on Sunday, December 7, 2014 at 4:00 p.m. in the Whitlock Music Center Recital Hall at Greenville College.

Membership in the Choral Union is open to all vocalists who are high school age or older. For more information, contact Dr. Jeff Wilson (Phone: 618.664.6561; E-mail: jeff.wilson@greenville.edu), Professor of Music at Greenville College and Music Director of the Greenville Choral Union.