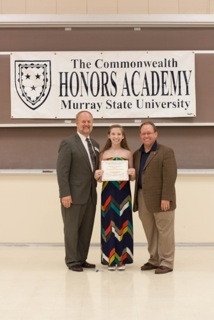 Greenville High School student Cassidy Spencer received the Certificate of Recognition from the Commonwealth Honors Academy at a reunion of Academy scholars held at Murray State University on September 27th.

Cassidy and 93 other students completed the three-week Academy at Murray State in June. During the three weeks, Academy scholars took two college-level courses, attended multiple lectures, concerts, field trips, and forums, and participated in a tri-weekly personal development seminar. As a successful graduate of the Academy, Cassidy will receive six hours of university credit, a $2,000 per year Murray State housing scholarship, and the option to take six additional hours from Murray State tuition-free.

The mission of the Commonwealth Honors Academy, currently in its fifteenth year, is “to challenge, educate, enlighten, and nurture the next generation of academic, civic, and business leaders in the region”. To qualify, students must have a 3.5 GPA on a 4.0 scale and an ACT score of 25 (or equivalent SAT, PSAT, or PLAN scores). For more information or to find details on applying to the 2015 Academy, please visit the Academy website at www.murraystate.edu/CHA .

Cassidy Spencer from Greenville High School is shown above receiving the Certificate of Recognition from the Commonwealth Honors Academy at a reunion of Academy scholars held at Murray State University on September 27th. Pictured with Cassidy is Dr. Randall Black, Academic Dean of the Academy, and Dr. Robert Davies, President of Murray State University.