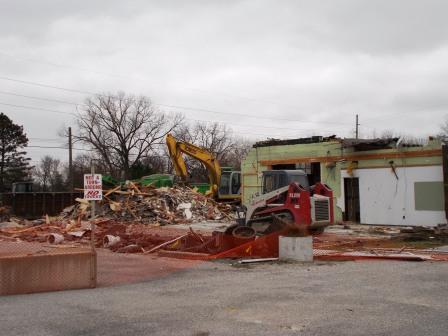 A business building at the intersection of Bowman Industrial Drive and Rt. 127 was torn down last week.

Don Rogier owns the property and told WGEL the building, which he purchased in the 1980s, was demolished to make the property available for something in the future.

Believed to have been built in the 1950s or early 1960s, the building was used by many businesses over the years and there had been two or three additions to it.

It was the location of Hediger Electric, a J.C. Penny catalog store, a music store, and most recently, the Greenville Flower Shoppe. Initially, the structure was built to be the Massey tractor dealership in Greenville, Smith Implement.

Rogier said no one was using the building when it was razed last week.

The land owner said there are no plans at this time for use of the property.