Austin Sebastian has been sworn in as a full-time police officer for the Greenville Police Department.

Sebastian, a Maryville resident, was appointed by the Greenville Board of Police Commissioners and took the oath of office on January 4th. 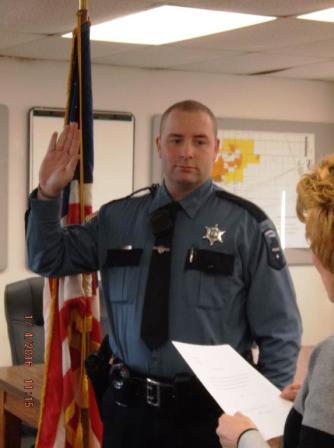 He has a Bachelor of Science degree in criminal justice from MacMurray College in Jacksonville and completed his police academy training at the Belleville facility.

Sebastian interned for the Springfield Police Department, served as a security officer, worked part time for the Bond County Sheriff’s Department, and was a part-time officer with the Greenville Police Department from July of 2015 until his full-time appointment.

The police commissioners recently completed creation of a new police eligibility list and Sebastian was number one on it.

Greenville Chief of Police Lou Lorton said Sebastian will be on probation for one year, as is the policy for all new officers. During that time he will be involved in field training, which can take up to a year, according to Chief Lorton.

Officer Sebastian is married with one child.

Chief Lorton said that his department is now at full force with 10 officers. Sebastian fills the vacancy created by the retirement of Jeff Gray.