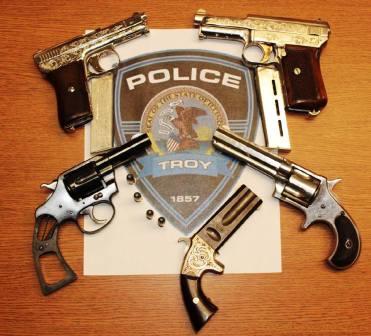 Troy Police have arrested two eighteen year olds and four juveniles for allegedly stealing over $10,000 worth of firearms during a house party. Kameron Garcia and Cole Young, both 18 and both of Collinsville, and four juveniles have been charged with alleged Aggravated Possession of Stolen Firearms.

On January 8, a Troy resident reported that six firearms, which were considered collectors’ items and had cash value over $10,000, were stolen from her home. During the course of the investigation it was determined that the firearms were stolen during a house party on January 1. The investigation further revealed that one of the stolen guns was found in a Metro-East high school a day prior to the reported theft.

On January 7 a police officer at a Collinsville high school located one of the stolen firearms and took it and a juvenile suspect into custody. Troy police detectives learned of the arrest in Collinsville and began a joint investigation with the Collinsville Police Department.