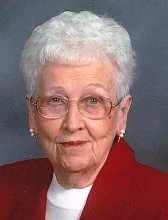 Mrs. Hempen was born in Beckemeyer, Illinois on July 20, 1930, a daughter of William and Angelena (Poettker) Huelsmann. She married Raymond Hempen at St. Mary’s Church in Carlyle on October 14, 1950, and he preceded her in death on June 28, 1998.

In addition to her parents and husband, she was preceded in death by a son – Allen Hempen on September 23, 1972; her siblings – Leo Huelsmann and wife Viola, Joe Huelsmann and wife Agnes, Edwin Huelsmann and wife Marie, and Margie Albers; and her in-laws – Marie and Joe Meyer, Delores and Fritz Meyer, Paul Hempen, Sam Jannett, and Ernie Warner.

Mrs. Hempen was a resident at Villa Catherine Assisted Living in Carlyle, and a member of St. Mary’s Church and the Beckemeyer American Legion Auxiliary. She was always a hard worker, and most recently worked at B&M Boat Seating in Carlyle. She was a die-hard Cardinals fan and enjoyed sewing, gardening, and her time with her family.

Expressions of sympathy in memory of Mrs. Hempen are suggested to Hospice of Southern Illinois or to the Alzheimer’s Association and will be received at Zieren Funeral Home.