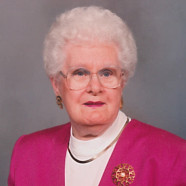 In addition to her parents, she was also preceded in death by her husband Ralph Kruse on July 3, 1982. Also preceded in death by her father-in-law Frank Kruse, mother-in-law Catherine Poelker and husband George Poelker, brothers-in-law and sisters-in-law Marcella and Marcellus Rolfingsmeier, Wilbert and Josephine Kruse, Dorothy and Frank Meyer, George and Rita Poelker, Alfred Poelker, Charles Schadegg and Esther Luebbers.

Alvina was a homemaker, she loved time spent with her grandchildren and great grandchildren, was an avid St. Louis Cardinal fan, and she also enjoyed knitting and cross stitching.

Funeral Mass of Christian Burial will be Monday, March 28, 2016 at 10:00 a.m. at St. Dominic Catholic Church in Breese with Fr. Patrick Peter and Deacon Linus Klostermann officiating. Interment will follow in St. Dominic/St. Augustine Cemetery in Breese. St. Joseph Hospital Auxiliary will have an honor guard at the funeral mass.

Memorials may be made to St. Dominic Church or St. Joseph Hospital Auxiliary and will be received at the funeral home.