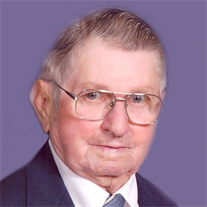 Mr. Frank was born in Alhambra Township on Fruit Road and grew up there. He actively served with the United States Army during the Korean War. After the war, he returned to the family farm and later was married. He and his wife lived in Highland, Grantfork, and Alhambra. He was a laborer out of Laborers Local 397, Granite City; later he was the laborer for the Illinois American Water Works in Granite City, retiring after 26 years of service. He was proud of his 60-year membership with the Laborers Union. He and his wife leased their farmland. He enjoyed spending time with his grandchildren, his red pick-up truck, and cutting grass with his John Deere lawn mower.

Funeral service will be at 10:00 AM on Saturday, April 02, 2016, at Salem United Church of Christ in Alhambra, IL., with Rev. Jerry Amiri, Pastor, officiating.

Memorial contributions may be made to Bond County Hospice and Salem Cemetery.