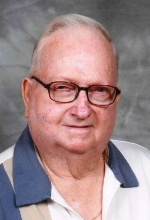 He was preceded in death by his parents and his wife, Marie; a grandson – Nathan Gebke; a granddaughter – Rebecca Isaak; his brothers – Edward, Alfred, Robert, and Jerome Isaak and a sister – Henrietta Isaak.

Jim served in the United States Navy for 4 years, and later joined and retired as E7 Master Sergeant from the Air Force Reserves after 17 years of service. He was a member of St. Anthony’s Church in Beckemeyer, a lifetime member of American Legion Post 1227 in Beckemeyer, and VFW Post 3523 in Carlyle. Jim umpired for the Clinton County Baseball League for 25 years and was inducted into the Clinton County Baseball Hall of Fame in 2005. He worked in the civilian sector at Scott Air Force Base as superintendent of transportation and sanitation from 1952-1973. Jim enjoyed camping and after retiring, he camped and wintered in Florida for many years. His greatest pastime was making soda and beer can airplanes, and he made over 1,200 of these airplanes. Jim also enjoyed watching St. Louis Cardinals baseball.

A Mass of Christian Burial will be celebrated at 10:00 A.M. on Wednesday, March 30, 2016, at St. Anthony’s Church in Beckemeyer. Interment with military honors will follow at St. Anthony’s Cemetery. Visitation will be held at Zieren Funeral Home in Carlyle on Tuesday, March 29, 2016 from 4:00 – 8:00 P.M and on Wednesday morning from 8:00 – 9:30 A.M. Expressions of sympathy in memory of Mr. Isaak are suggested to Heartland Hospice or to St. Anthony’s Church and will be received at Zieren Funeral Home.

Health Board President On Vaccine

Board Of Adjustments Recommends Variance