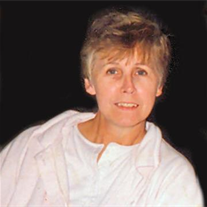 She was born on Saturday, February 22, 1936, in Breese, IL, the daughter of Albert and Agatha (nee Stuckenburg) Reilmann.

She was a member of Saint Paul Catholic Church, Highlland, IL.

She was born at Breese, IL and attended St. Dominic Catholic Church, Breese, IL, where she played the organ. She graduated from St. Dominic Catholic High School. She worked in St. Louis for a few years. After marriage she started working as an Admitting Secretary at St. Joseph Hospital, Highland, IL. She retired from St. Joseph Hospital with over 25 years of service. She then worked for Dr. Debra Feldott-Johnson in Highland for over 5 years. She and her husband enjoyed travelling, they traveled to the 48 states in the Continental United States. She collected elephants and porcelain wash basins/pitchers.