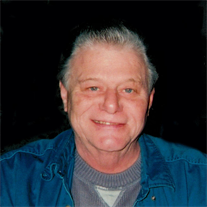 Born and raised at Staunton, IL. He served with the National Guard for two years; then joined the US Navy, served on the USS Dealey (Destroyer Escort) as a Machinist’s Mate, during “Blue Bat Operation” in the Lebanon Cold War Crisis. After his service he returned to Staunton and painted with his father. Later he was a printing supervisor at Hano, Mt Olive, IL; then a supervisor at Wall Street Journal, Highland, IL from 1967 to 1981. He then was a painter and home decorator until retiring in 2001. He and his wife vacationed with family. He enjoyed the outdoors, yard work, time with family and was a big fisherman.

Funeral service will be at 11:00 AM on Wednesday, March 30, 2016, at Spengel-Boulanger Funeral Home in Marine, IL., with Rev. Maurice Alms officiating.

Interment will be at Memorial Park Cemetery in Staunton, IL.

Memorial contributions may be made to Saint Jude’s Children Research Hospital .