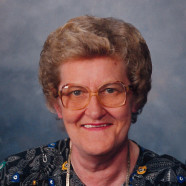 She was born August 16, 1930 in Germantown to George and Frances (Heidemann) Pille. They preceded her in death.

She married Ervin P. Winkeler April 28, 1953 at St. Boniface Catholic Church in Germantown and he preceded her in death April 18, 2005.

Surviving are her sons Ken “Erv” Winkeler and Tom Winkeler both of Germantown. A granddaughter Nicole Winkeler. A sister Ruth Winter of Breese, brothers-in-law Cletus “Buddy” Schroeder, Donald Hintz both of Germantown, Don Vandeloo and Ted Sautmann both of Carlyle.

Rosemary worked at St. Anthony’s Hospital in St. Louis, MO, and Wee Walker Shoe Company in Carlyle. She also ran an in home day care for over 30 years. She loved playing bingo with many of her neighborhood friends.

Visitation will be Wednesday March 23, from 9:00 to 11:00 am at St. Boniface Catholic Church in Germantown.

Family request memorials be made to the choice of the donor in place of flowers and other gifts and will be received at the church or through Moss Funeral Home in Germantown who is handling the arrangements.