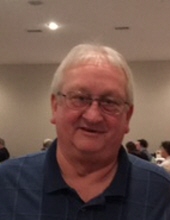 Ted was born December 14, 1951 in Highland, IL to Harry and Verna (Schaufelberger) Kapp. He married Carolyn Rees on February 14, 1995 in Greenville. He is survived by his wife, his children: Crystal Tongate and her husband Rick of Pocahontas, IL, James Kapp of Boerne, TX, Lindsey Kapp of San Antonio, TX, Brandon Bourgois and his wife Ashley of Hookdale, IL, and Joseph Bourgois and his wife Ammari of Greenville, IL. He is also survived by his brother Matthew Kapp and his wife Angie of Greenville, his sister Nancy Kapp of Greenville, IL, eight grandchildren, and one great grandchild. He was preceded in death by his parents, and two brothers Jules Kapp and Brian Kapp.

He grew up south of Greenville on the family farm and attended Greenville High School. He was a truck driver and had driven for Joe Bolla Trucking, McCasland Trucking, Yellow Freight and Consolidated Personal. He retired in 2003 due to health issues.