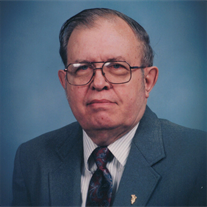 Walter was born at Highland; grew up in Highland; graduate of St. Paul Catholic School in 1951. He served in the US Army during the Korean War. He worked for Basler Electric for 1 years. He worked for Alton Box Company, working in the plant for 10 years, then in the office doing cost estimates leaving Jefferson Smurfit in 1984. He was a computer operator for 1st National Bank in Highland in 1985 the bank became Central Bank and later Merchantile Bank and retiring in 1999. He enjoyed following professional sports (especially baseball), gardening and coaching little league baseball for his sons. He worked Bingo at K.C. Hall for 8 years.

Memorial Mass will be at 10:00 AM on Friday, April 01, 2016, at Saint Paul Catholic Church in Highland, IL., with Rev. Msgr. David L. Peters, Pastor Emeritus, officiating.

Memorial contributions may be made to Saint Paul School Education Association.