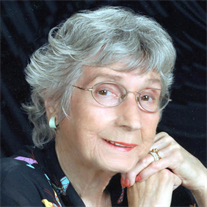 Ada Marie, the daughter of Fred and Pearl Vahle, was born July 29, 1922 in Alton, Illinois. Ada grew up in Alton, attended the public schools and Alton High School. She then went to Beauty School in Alton, IL where she got her degree. Ada owned and operated Vogue Salon on the Greenville square for many years. Ada then did hair out of her home for 55 years.

She is survived by their daughter Tana Lea Stanfill and husband Donald of Ballwin, Missouri, 2 grandchildren: Phillip McDonald of High Ridge, Missouri and Lisa Kamen and husband David of Deerfield, Illinois. She was the loving great-grandmother of Jessica McDonald, Emily Kamen and twins Matthew and Benjamin Kamen. Also surviving is a sister-in-law Joyce Flure of Clearwater, Florida.

Ada is preceded in death by her parents, husband Merl, siblings: Charles Vahle, Fred Vahle, and Hazel Highlander. She was a long time member of the St. Lawrence Catholic Church in Greenville.