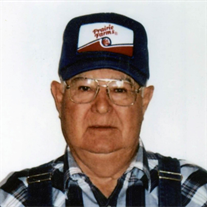 Funeral services will be held at 1:00 p.m. Friday, April 22, 2016 at the Donnell-Wiegand Funeral Home in Greenville with Pastor Melissa Stenhagen officiating. Interment will follow in Brown Cemetery. For those who desire memorials may be made to the St. Peter’s United Church of Christ at Hookdale or to the American heart Association. The family will receive friends at Donnell-Wiegand From 4 until 8 p.m. Thursday.

Arnold Adolph Zobrist, the son of Simon Freeland Zobrist and Geraldine B. Rainey Zobrist, was born on July 1, 1937 on the Zobrist farm in the Shawnee Neighborhood. Arnold grew up there and attended the Shawnee one room school and the Pocahontas School. Arnold answered his country’s call by joining the United States Army on May 4, 1957 in St. Louis and was honorably discharged on November 3, 1957. Arnold farmed with his father then continued the farm later with his son and grandson. Arnold farmed both grain and livestock retiring in 2012.

Arnold and Kay Frances Schuepbach were united in marriage on February 9, 1959 in Highland and enjoyed only 23 years together before her death on April 6, 1982. Arnold is survived by their son Arthur A. (Lorie) Zobrist who lives on the home farm, one grandson Aaron A. Zobrist, and his brother Kenneth (Shirla) Zobrist of near Wisetown.

Arnold is preceded in death by his parents, his wife Kay, and his sister Simona Sue Zobrist.

Arnold is a member of the Bond County Farm Bureau, the Holstein’s Association, Greenville Masonic Lodge # 245 A.F. & A.M. and the St. Peter’s United Church of Christ at Hookdale.