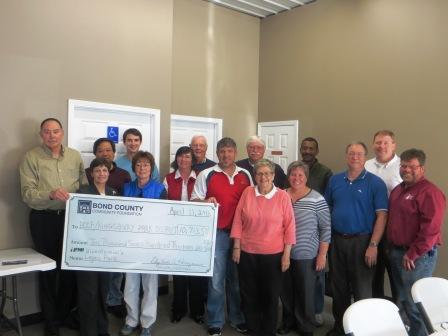 The remaining funds in the Greenville Bicentennial account were donated to the Kingsbury Park District Monday evening for the creation of a park in the west part of the city.

Rex Catron, chairman of the Bicentennial Committee, presented the $10,713.58 donation to the park board. He said from the beginning, the committee hoped for a legacy project to preserve the bicentennial legacy in the future.

Jerry Sauerwein, park district director, said the donation will help in the development of the new park. The park will be called Bicentennial Park and will have an address of 319 South Fourth Street.

Sauerwein said the creation of the park is about two years away. He has begun to look at playground equipment for it.

The park district is planning to place a fence around the property and the park will include bicentennial plaques honoring sponsors and others who were involved with the city’s 200th birthday celebration.