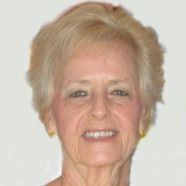 In addition to her parents, she was also preceded in death by her husband, John B. Ceto, whom she married August 10, 1968 in E. St. Louis and he died April 8, 1995; a granddaughter in infancy, Heather Hill; brothers, Bob Price and Jerry Price; and a brother-in-law, Bill Tite.

Carol retired as a legal secretary from Thompson Coburn Law Firm in St. Louis and was a member of St. Boniface Catholic Church in Germantown.

She enjoyed traveling, playing bingo, Friday night fish fries, and most of all spending time with her grandchildren.

“A mother recently asked if her son still needed her now that he was growing up, spending more time with friends, and becoming a man. A son will always need his mother for those times in life where things get hard and he needs an extra hug or those times that are easy and he just wants to spend time with her. There has been a large hole created in our lives with the loss of mom but as promised to her we will be strong, move forward and take care of each other. The mother/son bond is one of the strongest bonds ever created and lasts even through death.”

Memorials may be made to St. Boniface Catholic Church or to the donor’s choice and will be received at the funeral home.