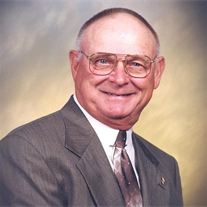 On November 27, 1950, he married Ruth Louise Elsie Bohnenstiehl at Highland, IL, and she survives in Highland, IL .

He was a member of Evangelical United Church of Christ. He was also a member of Helvetia Sharpshooters Society ; Madison Co. Farm Bureau ; Metro East Polka Club.

Dale was born in Highland, IL and grew up east of Highland. He attended Forester Country School and Highland High School. He graduated from Highland High School in 1946. He worked as Hired Hand, worked for Highland Box Board Company, and measured grain bins for ASCS. He and his wife operated a Dairy and Grain Farm east of Highland. He retired from dairy business in 1975. In 1980, his son assumed operation of the Grain Farms. Dale enjoyed polka and other dancing, traveling internationally and throughout the U.S.A. Playing cards was a great past time. He enjoyed working with wood and continued to help with the operation of the farm up until Spring of 2016.

Memorial service will be at 11:00 AM on Saturday, April 30, 2016, at Evangelical United Church of Christ in Highland, IL., with Rev. Christopher W. Hill officiating.

Interment will be at a later date at Highland City Cemetery in Highland, IL.

Memorial contributions may be made to Highland Home; Evangelical United Church of Christ; or Charity of the Donor’s Choice.