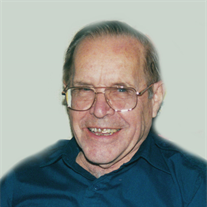 Mr. Abert was born at Kaufman Station on the family farm southwest of Alhambra, IL. He attended West Country School, then St. Jacob School for one year, and graduated from Highland High School in 1943. He served as a Master Sgt. with the U.S. Army with duty in Korea. He was with the 1st Infantry Combat Engineers. He received the Korean Service Medal & the Army Occupation Medal-Japan. Before and after his Army service, he worked at Wick’s Organ. He was a foreman in the Mill Room, building organ pipes and cabinetry. He retired after 53 years. He enjoyed camping trips in his pop-up camper to Canada, Illinois, Missouri, Tennessee, and Kentucky. In his retirement, he went on many senior citizen tours and also visited family and friends throughout the country. He loved to fish and enjoyed taking his family to Silver Lake and other area lakes and ponds. As a master woodworker, he created tables, chairs, jewelry boxes, and wooden toys, including his own kitchen cabinets. He had a love for animals and enjoyed tending to his large garden and playing cards especially Pinochle.

Memorial contributions may be made to Meals on Wheels or the American Cancer Society.