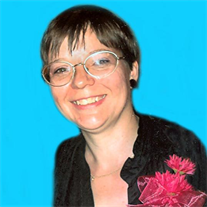 She was born on Saturday, November 25, 1961, in Highland, IL, the daughter of Virgil and Adeline (nee Frey) Wilhelm.

She was a member of Saint Paul Catholic Church, Highland, IL and Highland Garden Club.

Gayle was born in Highland, IL and grew up on a farm south of town. She graduated from St. Paul High School, Highland, IL, in 1979. She attended Eastern Illinois University and Southern Illinois University with an emphasis in English education. She worked for Widmer Floral Company, Highland, IL, for over 30 years and purchased the business, July of 2011. Anything that was delivered from her shop had to be “Right/Perfect”. Work was never a 40 hour week, it included Saturdays, Sundays and all hours of the day. She enjoyed knitting, knitted all of her grandchildren a baby blanket; shooting pool at Scooters and Beagle Inn; Bowling League at Hi Top Bowl; playing euchre; solving word and jig-saw puzzles. She raised her own vegetables, canned them and was known for her salsa. She loved her children and grandchildren. Annually, with her siblings, in honor of their mother they did a Christmas Tree for the Louis Latzer Homestead and the National Shrine of Our Lady of the Snows.

Memorial contributions may be made to Multiple Sclerosis Society or American Lung Association.