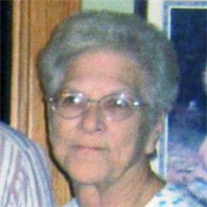 Merle Marie Perry Garrison, age 78 of Greenville, passed away at her home on Monday, April 4, 2016.

Merle Marie Jenner, the biological daughter of Ray and Buela Elkins and the adopted daughter of Marion and Mary Cochran Jenner, was born February 9, 1938 in McClure, Illinois. She grew up in Bond County and attended the one-room school on Shawnee Road. She married Terry Perry on March 9, 1957. They enjoyed 38 years together before his passing on June 2, 1995. Marie was a busy mother raising her 7 children at home. Marie did work at Hillview Nursing Home (Helia Healthcare) from 1976 until her retirement in 1996.

Marie and Steve Garrison were united in marriage on February 24, 2002. They have enjoyed playing cards together every night. Marie enjoyed camping, reading and spending time with the children, grandchildren and great-grandchildren.