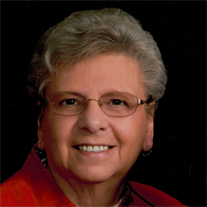 Mrs. Rutz was born at Highland, IL and grew up on the family farm northeast of Pocahontas, IL. She was a 1958 graduate of St.Paul High School in Highland. After High School, she had worked for Moseman Plumbing in Highland (later became Houseman Supply Company). She also worked part-time at Homer Rusteberg, CPA; As a Special Education Bus Driver for Zobrist Bus Lines for 10 years; in maintenance for Zobrist Coach Lines for 8 years; and at Grantfork Meat Market for over 10 years. She and her husband operated a farm east of Grantfork where she drove tractor & combine and did all the things that a farmer’s wife did – large garden, cooked for the help, fed the animals,.. Bonnie also baked wedding cakes and other baked goods for weddings for 18 years. She enjoyed quilting and had made quilts for all of her children and grandchildren. For over 50 years she had been active in the Grantfork Homecoming Parade – planning/building floats/coordinating.

Funeral Mass will be at 10:00 AM on Saturday, April 9, 2016, at Saint Gertrude Catholic Church in Grantfork, IL, with Father Scott A. Snider, Pastor, officiating.

Interment will be at Saint Gertrude Catholic Cemetery in Grantfork, IL.