The City of Greenville opened trash bids earlier this month and it was announced at Tuesday night’s city council meeting that the best prices for residential pickup were received from Doty Sanitation, the trash hauler in the city the past 11 years.

The council took no action, deciding to give the public time to give their opinion.

The city currently has the non-automated service. Willey said the largest advantage to using automated service is financial savings. Another benefit, according to Willey, is that Doty Sanitation will provide trash receptacles for residents to use. Those containers will be brown, rather than the originally-proposed orange, and will be offered in two sizes.

The Doty bid for automated pickup is lower than the option of keeping the service as it is.

Under the automated system, residents could not use their own containers. The only exception would be for seniors or disabled persons who have a single kitchen-size bag. The bags could be placed at the curb without a tote. These persons would still pay the monthly rate.

City Manager Willey said residents are invited to voice their opinions of the options by calling city council members and/or City Hall.

If the automated system is favored by the council, Willey said an educational program would be undertaken to provide residents information about it.

The council is expected to decide on a trash contract at a special meeting on May 24th at 7:30 p.m. 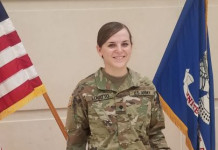