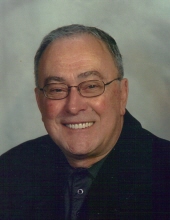 There will be no funeral service. Visitation will be from 5:00 to 8:00 p.m., Tuesday, May 31, 2016 at Gieseking Funeral Home, Altamont. Memorials may be made to the American Diabetes Association, First United Methodist Church, Altamont or the Donor’s Choice.

Eldon was born on Tuesday, December 20, 1932 in Keyesport, IL to Charles E. and Georgia (Nordike) Hammond. He married Betty J. Thomas in 1952 and she preceded him in death in 1960. He then married Sue Gray in 1961. He was an OTR truck driver for Yellow Freight prior to his retirement. He was a member of the First United Methodist Church, Altamont, Odd Fellows Lodge 849, Keyesport, and a former member of the Teamsters Local 710, Chicago. He was an avid Cubs fan.

He was preceded in death by his parents, wife, son Mark Hammond, and sister, Shirley Hammond.