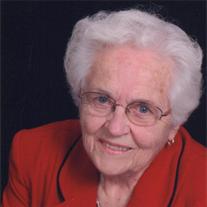 There will be a private family Celebration of Life at a later date. For those who desire, memorials may be made to Mary’s Place Prayer Ministry available at the Donnell-Wiegand Funeral Home and the Greenville Free Methodist Church.

Jeannette, the daughter of Herman and Marjorie (Campbell) Schwab was born July 2, 1928 in Rose, New York. She grew up the daughter of a Free Methodist minister and traveled to various churches all over New York State in her youth. Jeannette graduated from High School and Roberts Wesleyan Jr. College.

Jeannette and Howard Erford Newton were united in marriage on September 6, 1947. They enjoyed 62 years together before his passing on September 24, 2009. She is survived by their children: Douglas Newton and wife Margie of Greenville, Richard C. Newton and wife Jeannie of Fort Smith, Arkansas and Stephen Newton of Bowling Green, Kentucky. Also surviving are 4 grandchildren: Kelcey Gropp and husband Joel, Erin Eckberg and husband Jonathan, Benjamin Newton and wife Gretchen and Kara deNazarie and husband Matthew. She was the loving great-grandmother of 9 and sister of Howard Schwab.

Mrs. Newton was preceded in death by her parents, husband Howard and a son in infancy, John Newton. Jeannette was an active member of various Free Methodist Churches. Her family and friends remember her vibrant spirit and servant heart, all flowing from a faithful relationship with her Lord and Savior Jesus Christ.