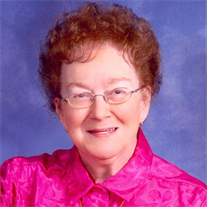 She was born February 15, 1937, in Highland, IL, the daughter of Clifford and Edna (nee Britsch) Schilling.

Mary was born in Highland, IL she attended Highland schools and graduated from Highland High School in 1955. Mrs. Buchheim was involved in Brownies and Girl Scouts in her youth and later helped with her daughter’s Brownies and Girl Scouts Troops along with helping with her son’s Cub Scouts and Boy Scouts Troop. Mary worked for Basler Electric from 1955-1957 and at Scott Air Force Base from 1957-70 where she had top secret clearance. She was an Avon representative since August 1, 1971. Mary enjoyed dancing,bowling, roller skating, Elvis Presley Music, and good times with friends and family at the Buchheim club house on Shoal Creek. She also enjoyed watching her children and grandchildren taking part in school activities and sports, BINGO, and visits to the “boat”, Las Vegas, and Tunica, and was an avid Cardinal Baseball Fan.

Interment will be at St. Joseph Cemetery in Highland, IL.