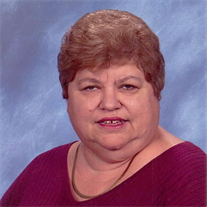 Patricia was born and grew up in Highland. She graduated from Highland High School in 1964. After she married in 1965, she lived east of Grantfork. She worked at Highland News Leader and the day her first daughter was born was the day she retired. After her children were in school, she had worked for Faith Countryside Home, SIU-E Provost Office, Highland Supply and Bruegge Furniture. She also worked as a church secretary for Grantfork United Church of Christ for over 30 years. In April of 2014, she moved to Highland Health Care Center. She was always a farmer’s wife. Her children and grandchildren were always very important to her. She loved “Tweety Bird”.

Funeral Service will be at 11:00 AM on Tuesday, May 17, 2016, at Grantfork United Church of Christ in Grantfork, IL., with Rev. Tim A. Darmour-Paul, officiating.