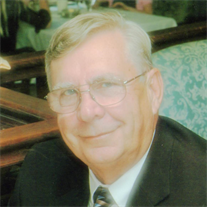 Robert Grant Jones, age 76 of Greenville, passed away at his home Saturday afternoon, April 30, 2016 with his wife and family at his side.

The family will have a Celebration of Life gathering at their home on Sunday, May 15, 2016 from 2:30 – 5:30 p.m. Memorials may be made to the American Cancer Association at the Donnell-Wiegand Funeral Home in Greenville.

Robert Grant, the son of Harold Michael and Cecelia Rose Galuhn Jones, was born March 21, 1940 in Chicago, Illinois. Robert grew up in Chicago, attended the local schools and graduated from DePaul Academy High School. Robert served our country in the United States Air Force, enlisting on August 18, 1958. He was honorably discharged August 17, 1964. Bob attended the University of Chicago after his service in the United States Air Force.

Robert and Barbara Ann Konstanty were united in marriage on May 1, 1965 in Chicago. He and Barbara lived in the Chicago suburbs of Oaklawn and Tinley Park. He and Barbara moved to Greenville, Illinois in 1998. They owned and operated Sky Writing, a silk screening and embroidery business in Greenville. They just celebrated their 50th wedding anniversary. Bob is survived by their 2 children: Keith Jones and his wife Patty of Temecula, California and Lisa Steinberger and husband David of Lemont, Illinois. Also surviving are 5 grandchildren: Grant and Grayson Jones, Matthew, Lauren and Nicholas Kowalczyk. Bob is also survived by his sister, Judith Catherine Leahy of Plano, Texas.

Robert was a member of the St. Lawrence Catholic Church and the Greenville Country Club. He loved spending time with his grandchildren, hockey, fishing and golf.