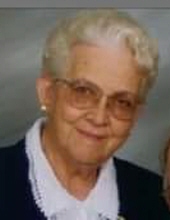 She had worked at a shoe factory in Litchfield, IL and retired from Crane Packing in Vandalia, IL. She also helped out in the operation of the family farm with her husband. She was a member of The Liberty Baptist Church. She loved gardening and planting flowers along with spending time with her grandchildren.