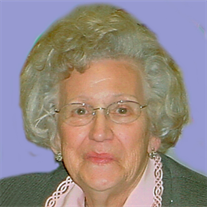 She was born on Saturday, June 03, 1922, in Jefferson City, MO, the daughter of William and Georgia (nee Ware) Willmeno.

Born and raised in Jefferson City, MO. After marriage Mr. and Mrs. Meyers moved to Granite City, IL and lived there until 1974. They moved to Highland, IL in 1974 and have lived in the same neighborhood since. She worked for White Rodgers Electric, St.Louis County (Afton) MO, for 35 years. She was an avid quilt maker and loved reading the St. Louis Post Dispatch and Highland News Leader.

Memorial contributions may be made to Saint Joseph Hospital Foundation or Friend’s Van.