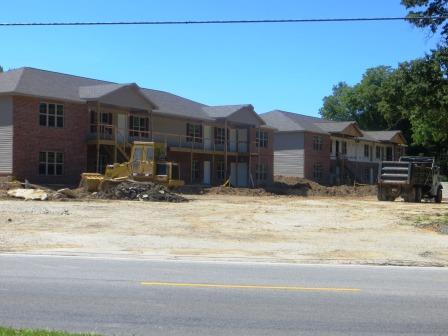 The construction of the Greenville Commons apartment complex, in the 500 block of Beaumont Avenue in Greenville, is continuing, but not without legal issues.

Two apartment buildings are being built by T. Bow, Incorporated of Lebanon and Thomas A. Bow.

The First National Bank of Dieterich has filed a foreclosure chancery case in Bond County Circuit Court alleging T. Bow Incorporated and Thomas A. Bow have defaulted on a promissory note that was due on March 29. The total alleged to be due, including principal, interest and late charges is at least $1,667,782. The mortgage was obtained on June 13th of 2014.

The court has granted a motion to give possession of the property to the Dieterich Bank, however enforcement of that court order has been delayed.

Court records indicate the parties came to an agreement on a construction loan on May 25th. If the defendants default on the construction loan agreement, Judge Ronald Slemer has ordered that the First National Bank of Dieterich may file a certificate of default with the court and immediately take possession of the Greenville Commons property.