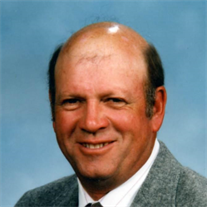 Guy L. Stewart, 83, of rural Smithboro, died Thursday, June 16, 2016. He was born May 23, 1933 north of Mulberry Grove, the son of Grover and Maggie (Ruppe) Stewart. He married Maxine M. Tompkins on January 16, 1960 at the Pleasant Mound United Methodist Church and she survives. In addition to his wife he is survived by a son, J.Todd (Marti) Stewart of Effingham, two daughters, Beth (Matt) Pokojski of Centralia and Becky (Tim) Caniff of Greenville. He is also survived by a sister Betty Stewart of Springfield, IL, five grandchildren, Melissa, Erin, Tyler, Will, Sam, one great grandson, and numerous nieces and nephews. In addition to his parents he was preceded in death by two brothers, Samuel and John Stewart, and 3 sisters, Cleta and Clara Stewart, and Nina Oertwig.

Guy was a farmer and he and Maxine owned and operated Stewart’s strawberries in Mulberry Grove Township for 40 years. Guy was also an employee of Pet Incorporated and later on as a highway maintainer for IDOT. He was a veteran of the United States Army and was drafted on May 20, 1953 and served in the 47th Armored Field Artillery Battalion of the 5th Armored Division. He was awarded the Korean Service Medal and was honorably discharged on April 28, 1955. Guy was a member of the Bond County Farm Bureau and the Greenville First United Methodist Church.

Funeral services will be held at 11 A.M. Monday, June 20, 2016 at the Donnell- Wiegand Funeral Home with Pastor Florine Scott officiating. Visitation will be held from 9 A.M. Monday until service time. For those who desire, memorials in Guy’s memory may be made to the Greenville First United Methodist Church. Burial will follow in Mt. Auburn Cemetery with Full Military Honors by American Legion Post #1180 of Mulberry Grove.