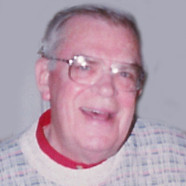 He served in the U.S. Army Air Corp (now known as the U.S. Air Force) during WWII in Cadets and was an instrument specialist and instructor to squadron leaders at air bases in Georgia and Texas.

He married Jane Schwartz April 18, 1948 at St. Francis Xavier Church in St. Louis and together they opened Lampen Clothing Store in Breese, following in his father’s example. He ran a successful men’s apparel store until his retirement in January 1988. After retirement he enjoyed time with family, friends, golf and travel.

He was a proud member of the Breese Chamber of Commerce (past president), Breese American Legion Post 252, Breese Lions Club, Breese Knights of Columbus Council 2869 and St. Dominic’s Catholic Church.

His family will always remember his strength in the face of 12 years of total blindness, living independently at home and how he inspired his children, grandchildren and great grandchildren through his example and lessons.

Funeral Mass of Christian Burial will be Wednesday, June 29, at 10:30 AM at St. Dominic’s Church in Breese, with Father Patrick Peter presiding. Interment will follow at St. Mary Cemetery in Carlyle.

In lieu of flowers donations may be made to RP Fighting Blindness, American Cancer Society or Mater Dei High School.