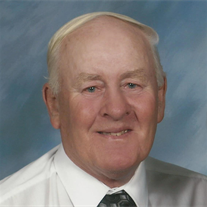 Joseph A. Gebhart, 83, of Aviston, died Wednesday, June 15, 2016 at Barnes-Jewish Hospital in St. Louis, MO. He was born March 11, 1933 in Aviston, IL, the son of Albin and Mary (Peters) Gebhart. He married Mary Jane Litteken on August 25, 1959 at St. Francis Catholic Church in Aviston and she survives in Aviston.

In addition to his wife he is survived by a daughter, Brenda Gebhart of Chesterfield, MO; three sons, Jeffery Gebhart, Darryl Gebhart, and Patrick (fiancée, Crystal) Gebhart all of Trenton; a grandson, Carson Joseph Richter; two sisters, Dolores Ruess and Viola Hagen; sisters-in-law and brothers-in-law, Ruth Kapp of Highland, Maurice & Bonny Litteken of Highland, Leo & Pat Litteken of Albers, and Judy & Jim Boehler of Aviston; and he is also survived by numerous nieces and nephews.

Mr. Gebhart was a lifelong farmer on the family farm. He was a veteran of the United States Army having served from 1954-1956. Joe was a member of the Clinton County Farm Bureau, a 50 year member of the Catholic Knights and Ladies of Illinois, and a former member of the Mid-Am Dairy Association.

Memorials may be made to St. Francis Parish and will be received at the funeral home.