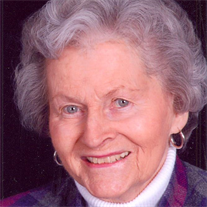 She was a member of Saint Paul Catholic Church. She was also a member of Highland Country Club.

Leona was born in her families home in Highland. She was a 1945 graduate of St. Paul High School. Following graduation, she lived with her sister in Birmingham, AL and worked for the Better Business Bureau. She returned to Highland and worked for Pet Milk Co. as a secretary until her first child was born. She stayed home with her children until they were grown and then worked part time for Dr. William Drake. She was active at the Highland Country Club, playing golf on Wednesday League, and was an avid Bridge player, playing in several Duplicate Bridge Groups. She enjoyed holiday family gatherings and taking long walks.

Funeral Mass will be at 11:00 AM on Wednesday, June 22, 2016, at Saint Paul Catholic Church in Highland, IL., with Father Pat G. Jakel officiating.

Memorial contributions may be made to Alzheimer’s Association or Hospice of Southern IL.