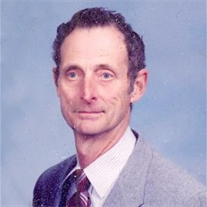 He was born May 28, 1929, in Belleville, IL the son of Oscar and Genevieve (nee Grimmer) Dickhaut.

He was a member of Saint Paul Catholic Church. He was also a former member of Holy Name Society of St. Paul Church; The Stove, Furnace and Allied Appliances Workers Local 60 of Belleville; and a former trustee Clinton County Electric.

Oscar was born in Belleville, IL. He grew up in Mascoutah and attended Holy Childhood School, Woodland County School, and New Baden High School. He helped with the family farm. He served with the U. S. Army from 8/10/1951 – 11/21/1951. He worked 42 years at Peerless Product Enamel Company in Belleville, IL. After his marriage, he moved to rural Trenton “St. Morgan”. He lived there until April of 2016. He was the “Mayor of St. Morgan”.

Funeral service will be at 10:00 AM on Friday, June 03, 2016, at Spengel-Boulanger Funeral Home in Highland, IL., with Father Pat G. Jakel officiating.

Memorial contributions may be made to “Charity of the Donor’s Choice” or as a Mass at St. Paul Church