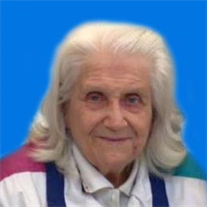 She was a member of Saint Paul Catholic Church. She was also a member of Lee Iten Post 439-American Legion Ladies Auxiliary in Highland, IL.

She was born at Highland, IL and grew up at St. Rose. She attended St. Rose School. Before her marriage, she was a Candy Striper with St. Joseph Hospital. After marriage, she and her husband live southeast of Highland in Sebastopol area. She and her husband renovated the old East Sugar Creek School House on Leroy Road and made it their home in 1950. She had lived all of her life on the same hectare of land (89 years). She made her own wine for 30 years. She enjoyed quilting, gardening and canning. She cleaned the Aviston American Legion Hall for many years. She loved spending time with her large family.

Funeral Mass of Christian Burial will be at 10:00 AM on Tuesday, June 21, 2016, at Saint Paul Catholic Church in Highland, IL., with Rev. Father Pat G. Jakel officiating.

Memorial contributions may be made to American Legion Post 439; Masses; All In 4 You Home Health Services, Inc.