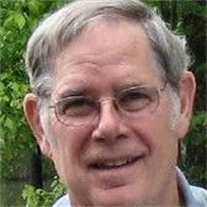 Robert was born in Highland, Illinois and grew up in rural Greenville, Illinois. He graduated from Greenville High School in 1959, attended Southern Illinois University Carbondale, and earned his BA degree from U of I, Springfield in 1998. He served with the U.S Air Force Reserves as a Medical Corpsmen. His career included working as a human resources director at several companies including Olin in East Alton, National Marine in Wood River, Harvard Industries in St. Louis, Thrall Car in Clinton, and Lewis and Clark Marine in Granite City.He was a District Executive for the Boyscouts of America.

He enjoyed the outdoors, walking in the woods, hunting for morel mushrooms, mowing, cutting firewood and hiking and backpacking with scout troops and his son. His son became an Eagle Scout with his father’s guidance. He built his family’s home in the woods outside Bunker Hill. With family and friends, he traveled to all 50 states and many countries.

But primarily Bob’s life was defined by his deep love of community and his desire to be of service. He was an avid volunteer: active in the Wood River Jaycees; Trails West Council Boy Scouts of American, where he received the Silver Beaver Award; Rotary and Kiwanis in Clinton; St. John United Church of Christ of Midway, where he served on the church council and was active in Brotherhood and HIS Ministry. He participated in many research studies at Washington University to help find a cure and treatment for Parkinson’s Disease. He will be remembered as a kind, generous, and loving husband, father, brother, and friend.