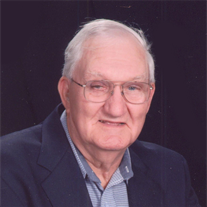 He was a member of Saint Paul Catholic Church. He was also a member of Knight of Columbus Council #1510; Lee Iten Post #439, American Legion; member of the former Holy Name Society.

Roy was born near Pierron, IL. He attended Immaculate Conception School. He worked on the family farm and after his parents’ death, he operated the family farm until 1964. He worked for Bellm Freights. He started at St. Paul in 1970 as a Maintenance Manager of the Church and School. He retired with 24 years of service in 1994. In his retirement he worked for Koch Cleaners. He always had a big garden east of his house. He enjoyed woodworking, working puzzles. He traveled to over half of the U.S.A., enjoyed day trips, and a trip to Canada. He was a generous, honest, and loving family man. He enjoyed times with his grandchildren and great grandchildren.